The Niagara Falls are situated on the Niagara River, marking the international border between New York, USA and Ontario, Canada. These voluminous waterfalls are actually composed of three sections – Horseshoe Falls on the Canadian side, American Falls and Bridal Veil Falls on the American side. The Horseshoe Falls are about 2,600 feet (790 m) wide and drop about 173 feet (53 m). While not exceptionally high, the Niagara Falls are the most powerful waterfalls in North America. Combined, the falls has an average discharge in high flow more than 7000 cubic meters per second. Over 90% of the volume is over the Horseshoe Falls. 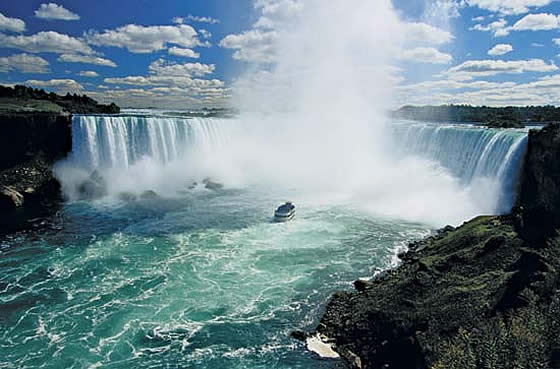 Niagara Falls were formed when glaciers receded at the end of the last ice age about 10,000 years ago, and water from the newly formed Great Lakes carved a path through the Niagara Escarpment in route to the Atlantic Ocean. The verdant-green colour of the water is due to the estimated 60 tonnes/minute of dissolved salts and “rock flour” (very finely ground rock) generated by the erosive force of the Niagara River itself. The best-known tourist attraction at Niagara Falls is the Maid of the Mist boat cruise, which carries passengers into the rapids immediately below the falls. The waterfalls don’t miss their beauty even at night when floodlights illuminate both sides of the falls for several hours after dark (until midnight). The spray that rises at the foot of the falls forms beautiful rainbows when the sun shines. During winter, the mist from the falls freezes forming huge mounds of ice that measure up to 50 feet thick. 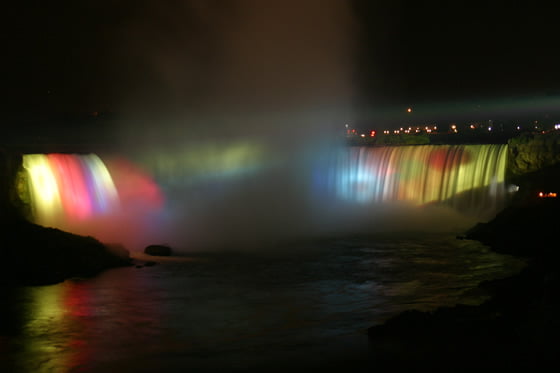