Today we are revisiting a spooky topic. Remember our post about the Haunted Forests in the USA? Now we are going to the misty woodlands of United Kingdom, where we picked 7 of the most creepy locations for your pleasure (or not).

Puckley holds the dubious title of the most haunted village in the UK in the Guinness Book of Records, but its adjacent forest, Dering Woods, also called Screaming Woods, grabs the attention of people (and tourists) with its reported cases of ear-splitting screams coming from the deeps of the forest. In 1948, a creepy case occurred there. Twenty dead bodies were found in the woods, eleven of them were children.
Brave people can spend a night there by booking a tour with one of the many nearby ghost tour companies.

This ancient woodland was once a royal property and now is a great place for running, biking, and walk your dog. But, incredibly, this forest is also considered by many people as the most creepy of all haunted forests in England. One of the most notorious ghosts there is the spirit of Dick Turpin, a famous robber who used a cave in the woods as a hiding place.
Many poltergeist hunters and fans of the paranormal go to the Epping National Park, where the forest is located, to study, and sometimes to get in touch with some of its known ghosts.

Here is another ancient woodland. Paranormal enthusiasts love this Welsh haunted forest due to its many allegations and stories of weird things that happen there. The claims go from sights of dark shadows to strange forces grabbing your ankles to make you fall on the ground. Unfortunately, the size of the forest has decreased over the years due to the expansion of the city, but you can still go make a visit and stay a night there.

This one is not internationally famous as a haunted forest, but who says that ghosts like publicity? Nicknamed by the locals as Fright Wood, this pleasant forest is supposedly frequented by the ghost of a woman looking for her lover. People claim that it’s possible to hear her crying and sobbing inside the woods.

It is said that this place was an ancient Druid site, where rituals and sacrifices had taken place. It is even possible to see the stone formations and trenches made back then. Frightening occurrences of unearthly sounds coming from the woods, sights of shadowy figures, and trees with blood stains will make even the bravest adventurer wary of spending a night in there.

This forest is home to the grave of Seath Mor, a formidable warrior who lived in the 14th century. Local legend says that if you wander too deep into the woodland, Seath’s spirit will appear to you for a challenge. If you keep calm and don’t run away, the ghost will leave you in peace to explore. If you run from it, you will never see its spirit again, even if you come back. 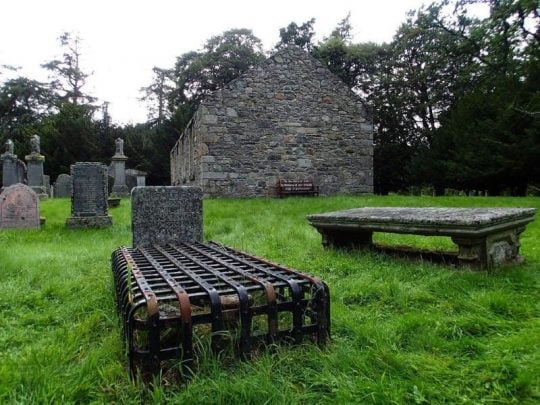 In the 19th century, a man was found dead in the River Spey after tossing a stone from the Mor’s grave to the same river. Today, an iron cage protects the grave, or better, foolish people, from getting too far from messing with Seath’s resting place.

The last of our Haunted Forests have decreased its size over the years, but still, have many stories and legends related to dangerous fairies and hobgoblins. Signs of paranormal phenomena are diverse. People have reported cases involving sounds of unseen horses and the impression of someone touching them inside the forest.

As you noticed, there are two versions of the same photo for each place. We did a (terrible) transformation from the “normal” photos to a “spooky” version of them just for fun.