The Carnival period is coming. The world is getting ready for this great spectacle. And what a better place to enjoy it than Brazil, which in 2017 officially starts the Carnival festivities on February, 28th. Being the country with the largest Catholic community in the world, Brazil also hosts, probably, the largest and most famous Carnival parade on earth.

But, what makes the Brazilian Carnival so great? Maybe it’s because of the Carnival floats, the costumes, or those huge parades. For me, the best of the Carnival is the Bateria (drums), they are great and make all the difference in the parade. If you don’t know what I mean, here is a short video of a samba school practicing drums.

So, how do you feel? Want to see more? Please, feel free to check our list of the Top 10 Brazilian Carnival Destinations, starting right below. 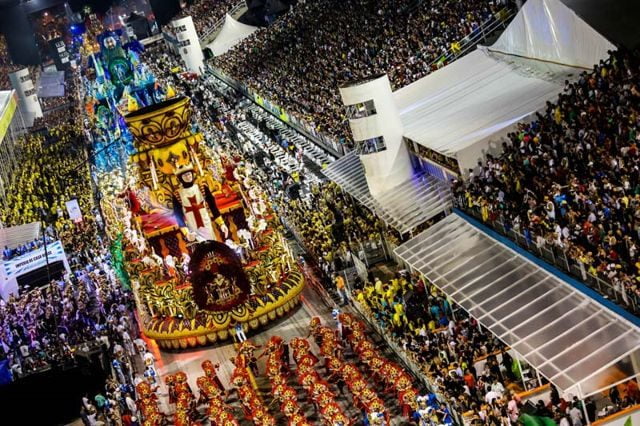 Not as famous as Rio de Janeiro, São Paulo (the city, not the homonymous state of São Paulo) is still a great choice to spend the Carnival days, providing good infrastructure, transport and many options for parties. The most famous parade in the city happens on the Anhembi Sambadrome (Sambódromo do Anhembi), where the samba schools, each one using a different theme for their presentation, compete in a huge and multicolored procession. 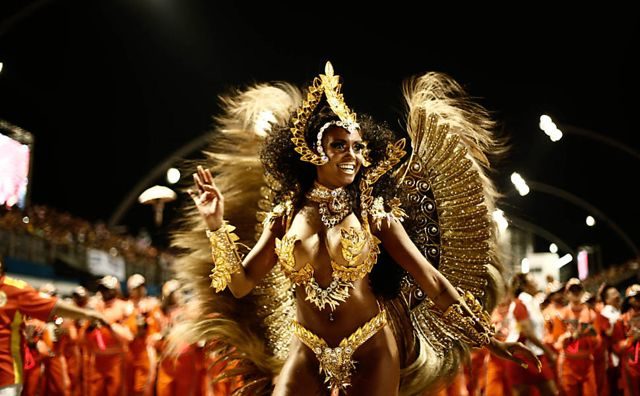 1 – Enjoy two big parades in a row – São Paulo’s Sambódromo do Anhembi party goes from Friday to Saturday night, ending one day before Rio’s sambódromo parade starts. It can be a good idea to consider visiting two of the most renowned pageants in a row.
2 – Visit the Samba Schools before the festivities – The samba schools in São Paulo have their own places where they practice. Those places are a plus and provide an extra worthy show, starting your engines for the upcoming parade.
3 – If watching the parade is not enough for you, you must know you can make part of it. You can enter in contact with the schools directly, or check with your local travel agency. The most known samba schools in São Paulo are:

The Carnival Parade in Fortaleza provides an excellent option, with many different rhythms besides samba, being Forró the main rhythm.

The event usually starts before the official date for the national event and count with many blocos, which are blocks of people marching and dancing different rhythms depending on the location.
The best locations for Carnival in Fortaleza are:

Praça do Ferreira is part of a circuit you don’t want to miss. A good place to stay is the Marina Park Hotel, a good hotel not far from there, or check here for more options.

Located in the countryside of Minas Gerais state, Diamantina was once a place used for diamond extractions (hence the name, Diamantina), now it is a charming cultural and historical city, where people can enjoy watching the blocks of Carnival passing through the streets or join them in this wonderful party.

Hosting the most democratic party in this list, Recife’s Carnival is driven by blocks of parades in which you don’t need to pay to take part in most of them. 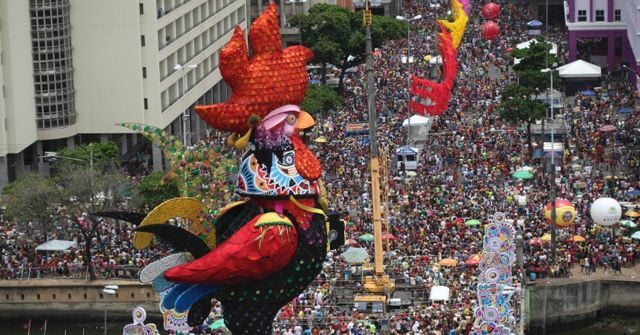 As well as Olinda, the rhythm is Frevo, a remarkable dance so unique that it was added on UNESCO list of intangible world heritage. 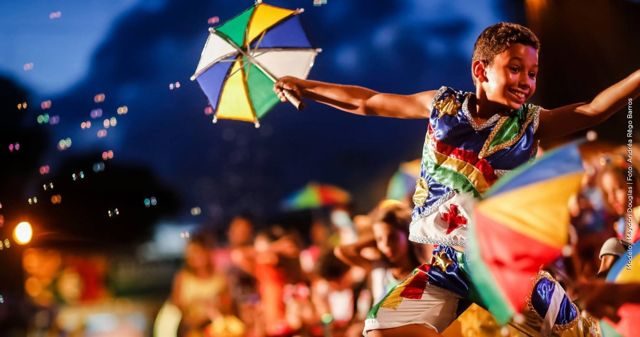 The Galo da Madrugada is one of the biggest Carnival parades in the world (disputing the first place with Rio’s Cordão da Bola Preta) and it happens there, in Recife. It’s not the same event promoted by the city and is free to participate too (buying the official T-shirt is completely optional). 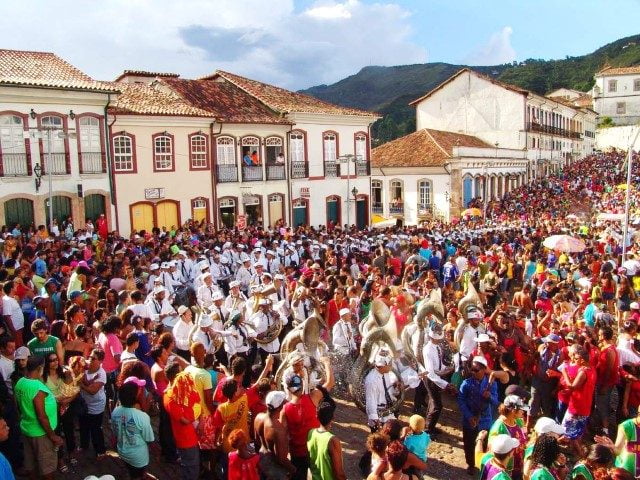 Ouro Preto, in Minas Gerais, provides a traditional Carnival, with people partying while marching throughout stone streets and among colonial buildings. The local university also plays a big role in this event, so you can expect many young people and parties inside the campuses too. 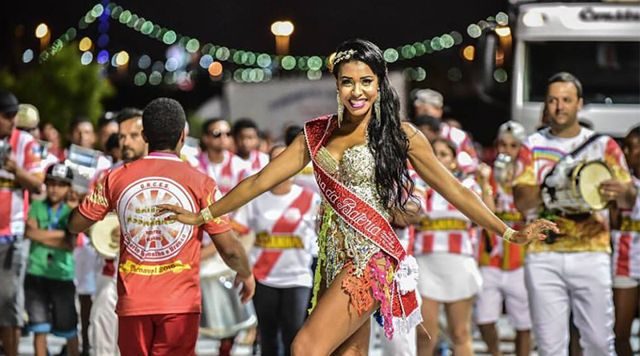 Famous among people in South America (especially from Argentina), Florianópolis is a beautiful island that also hosts an unforgettable Carnival experience.

Florianopolis is also a worldwide known surfing spot, and has plenty of beach resorts for those who want to experience the “Magic Island”, as some people use to call it.

Some of the best places to stay in Florianópolis are: Costão do Santinho Resort, Il Campanario Villaggio Resort and Pousada Mares do Santinho. 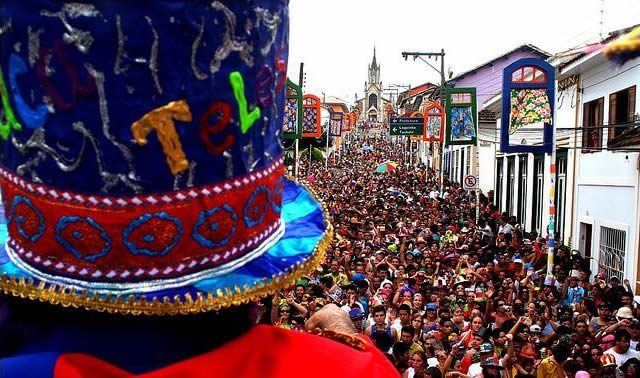 An underdog in this list, the Carnival in São Luiz do Paraitinga is traditional, and it is getting more and more famous in Brazil, and famous enough to be on our list 🙂 .
A good place to stay there is the Pousada Araucária, well rated, and only 500 meters from the city.

Salvador’s Carnival is well-known in Brazil and in the world. The main rhythm is Axé, a contagious rhythm derived from African styles. A good example is Olodum, an African-Brazilian percussive group and one of the most famous Carnival blocks in Brazil.

The festivity is literally driven by “Trios Elétricos”, enormous moving stages with bands on top that lead and incite people to carry on with the party. Sometimes, the excitement is so big that people keep partying for days long. Barra/Ondina and Campo Grande/Centro are the city’s two main carnival circuits, where for more than 16 hours a day and for six consecutive days dozens of bands run through, being followed by eager crowds, immersing themselves in music and dance.
To be part of the blocos it is necessary to purchase an “abada” (a colorful shirt), but you can also get a ticket and watch the “trios” passing by from exclusive areas called “camarotes”.

The most famous Carnival in the world is in Rio de Janeiro. It counts with a myriad of options for every taste, from the traditional street blocks, as the Cordão da Bola Preta, the actual world’s largest parade, and the world’s famous Rio’s Sambadrome, where, as well as in São Paulo, the samba schools, each using a different theme for their presentation, compete in a huge and colorful procession.
You can check more about Rio in our Top 25 Places in Rio de Janeiro list 🙂

1 – Visit the Samba Schools before the festivities – This is a must, definitely. The samba schools in Rio de Janeiro have their own places where they practice.

Those are must-visit places, when you’ll start feeling how the parade is going to be.

2 – Reserve a place to stay as soon as possible – The prices for the Carnival are high and the hotels usually get fully booked in this season.

3 – Be part of it – As well as in São Paulo, Rio de Janeiro’s samba schools are completely opened for people who wants to join them and be part of this spectacle. So, if watching the parade is not enough for you, enter in contact with the schools directly, or check with your local travel agency. There are many samba schools in Rio, and the most known are: 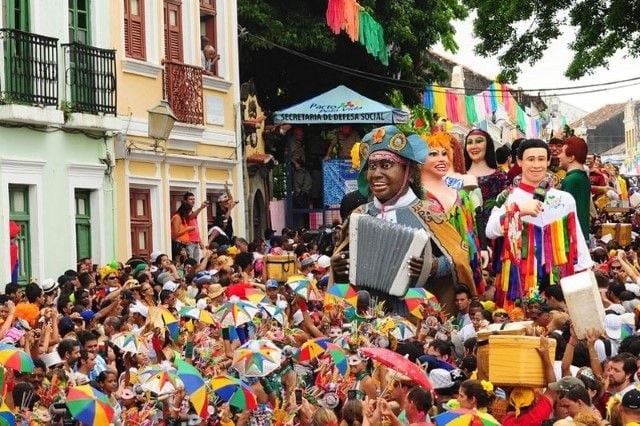 A unique event, with a traditional street Carnival where people march together with 2-meter tall figures (around 6.5 feet): the Olinda’s dolls. 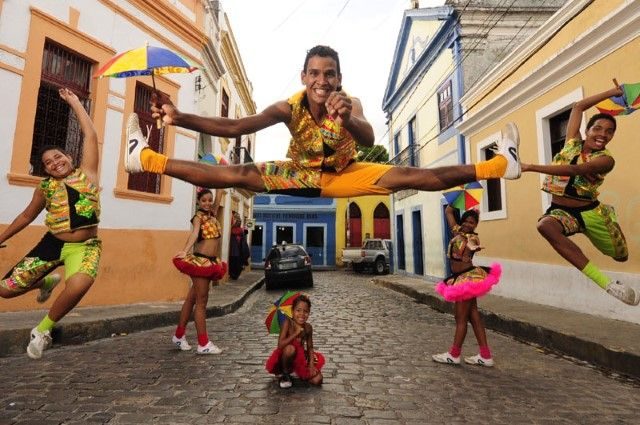 The rhythm is “Frevo”, so you can expect plenty of people branding their colorful umbrellas while dancing and marching on the streets of this beautiful city.

Brazilian Carnival is amazing indeed, but you need to remember to: