It’ s April: springtime in the northern hemisphere! Flower fields bloom into stunning landscapes for a short time this season of the year. It doesn’t matter the type of the flower, it can be tulips, sunflowers, lavender and many others, they all complement with their beautiful colors. The fields are so colorful, that definitely are sights every photographer should see. As if someone had spilled paint instead of planting flowers, these flower fields seem like a color palette. Although the most famous place to see flowers is in the Netherlands, you can find amazing flower fields in many places around the world. Below is a selection of the spring’s most spectacular sights. The Most Beautiful Flower Fields with incredible rainbow-hued fields in bloom all over the world. 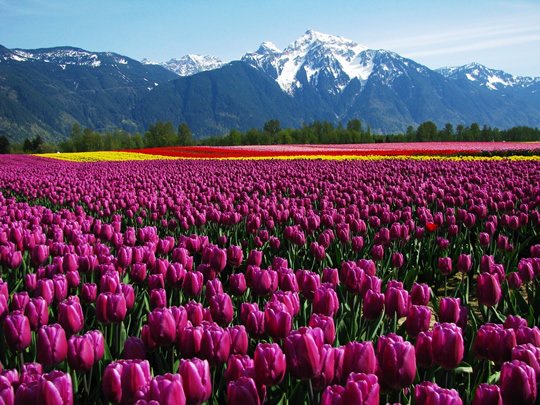 Agassiz Tulip Festival would be just another field of tulips, but the landscape surround really makes all the difference. It is set against the snow-capped Mount Cheam, in a location with spectacular tulip viewing. The festival showcases 30 varieties of tulips spread over 40 colorful acres. 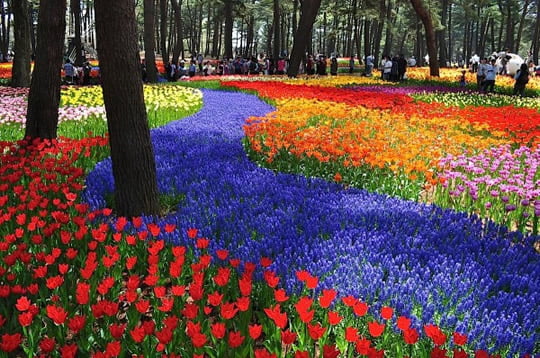 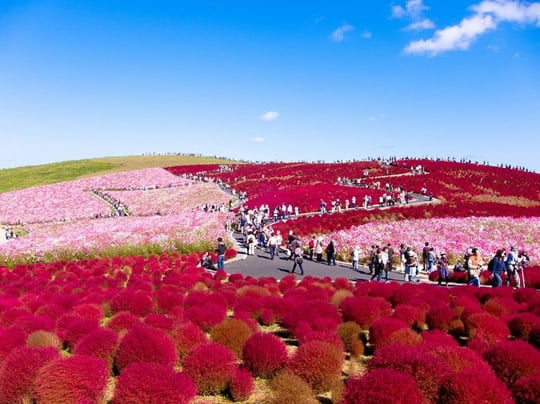 It features millions of blooming flowers all year round, such as narcissus and tulip in spring, baby blue-eyes and rose in early summer, zinnia in summer, and kochia and cosmos in autumn. 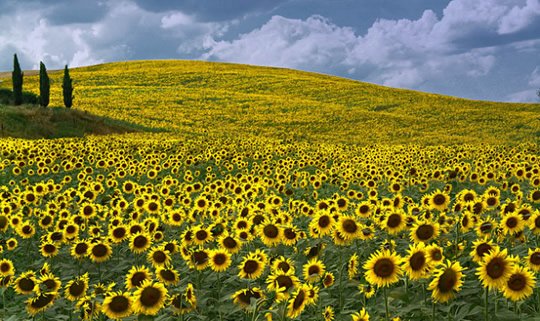 One of the most romantic places to see sunflowers is in Tuscany. There are fields all over the area in the height of summer, between medieval villages perched on hilltops. 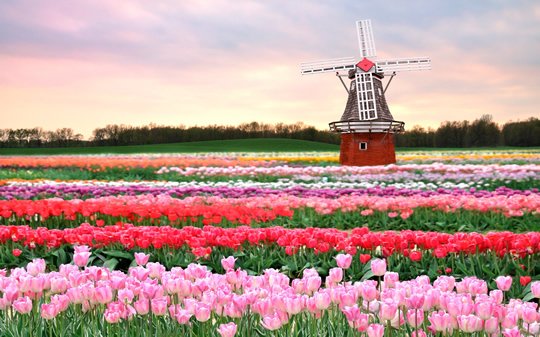 When talking about flowers, Netherlands certainly comes to mind. Located in Lisse, Keukenhof is also known as the Garden of Europe. 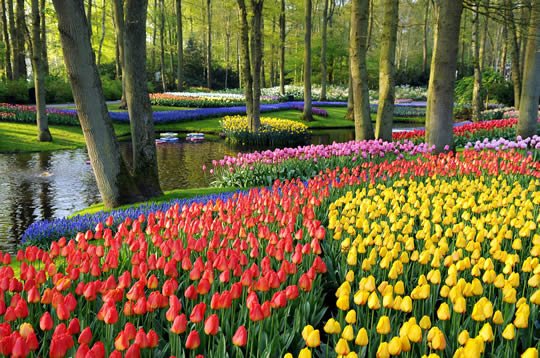 Approximately 7 million flower bulbs are planted annually in the park, forming large colorful rugs in such an abundance of colors found nowhere else in the world. It’s possible to see the colorful blooms during March, April and May in an area of 32 hectares, which makes it the largest flower garden in the world. 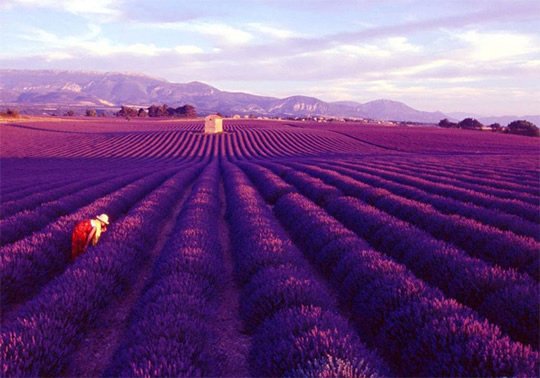 The Lavender Route in Provence is an astonishing scenic drive home to some of the most picturesque villages in the country. 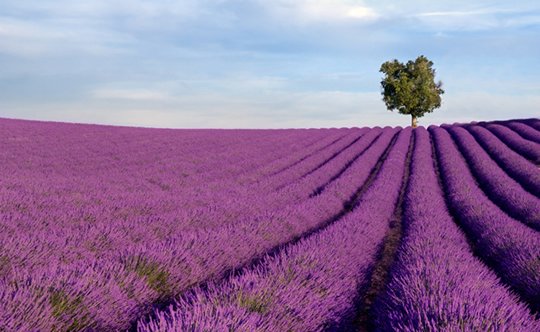 Surrounding the route, during the summer, when the plants are in full bloom, it is possible to see fields and fields, with rows and rows of lavender. 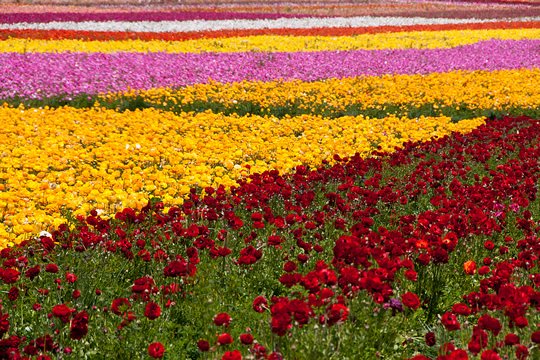 It displays extraordinary colors along the Carlsbad coast. 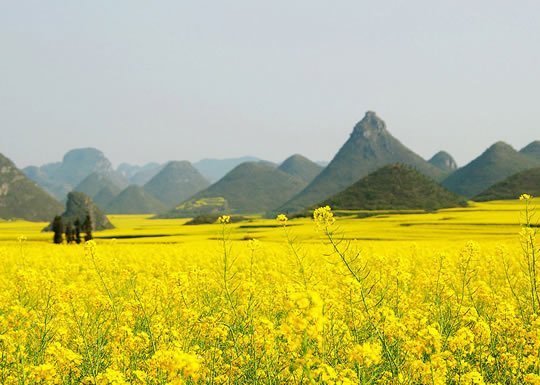 In Luoping County, from February to March, vast farmlands get covered in golden all the way to the horizon, by the bloom of canola flowers. 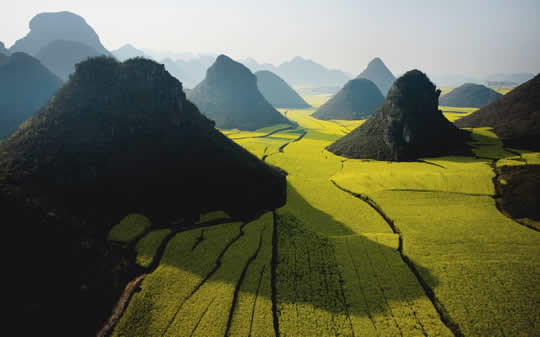 Rows and rows of dark mountains in the background beautifully contrast with an unbelievable sea of yellow flowers. 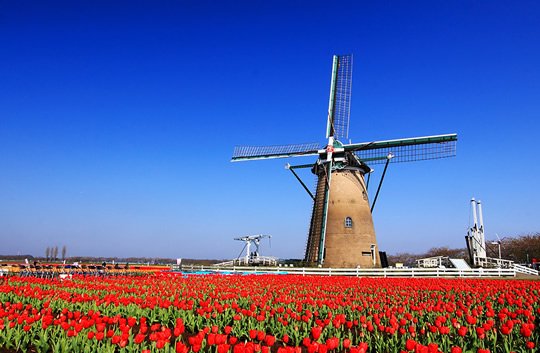 Sakura Tulip Festival is held in Sakura Furusato Park in April. The park is beautifully decorated with 530,000 bulbs of 108 varieties of tulips, in a field with a Dutch windmill in the background. The windmill represents the friendship between Japan and the Netherlands, and it is the only one of this type in Japan. Its presence among tulip fields makes you feel like being in the Netherlands. 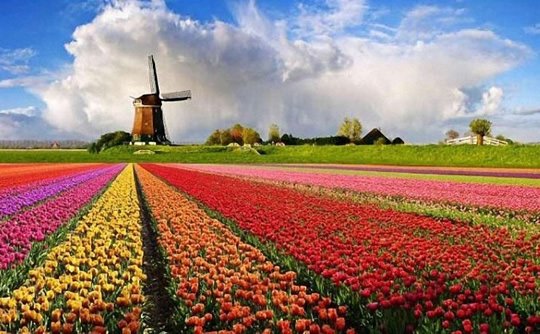 How to talk about flower fields and not to mention the Netherlands. The area between Haarlem and Leiden is regarded as the bulb district, where more than three billion tulips are grown each year. 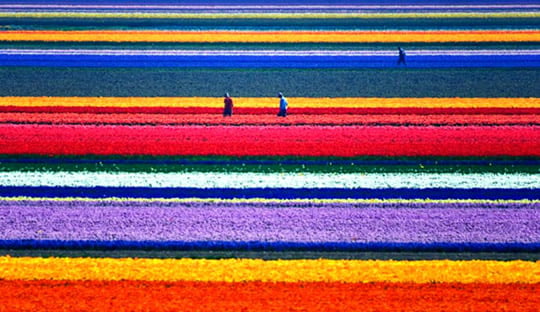 Like a rainbow, vibrant blues, reds, pinks and yellows sprawl as far as the eye can see. 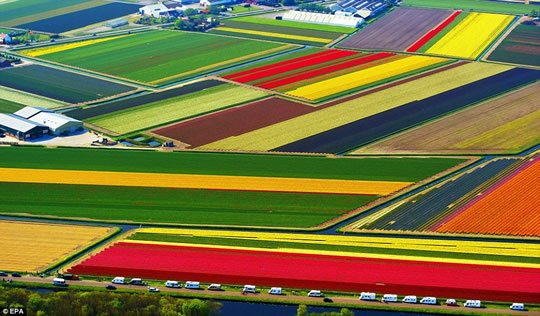 The tulip season begins in March and lasts until August, when the Dutch countryside becomes a sea of tulips. 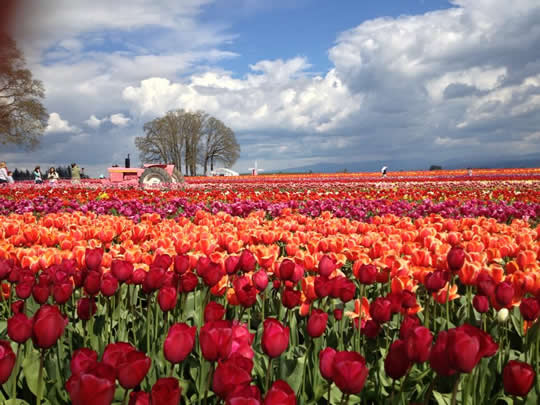 Wooden Shoe Tulip Farm opens their fields to the public for an entire month, but with more than 50 acres of different types of flowers, there is usually something in bloom. 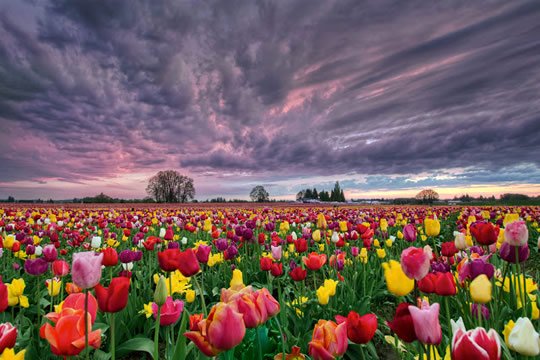 The festival normally starts at the end of March and runs through late April. 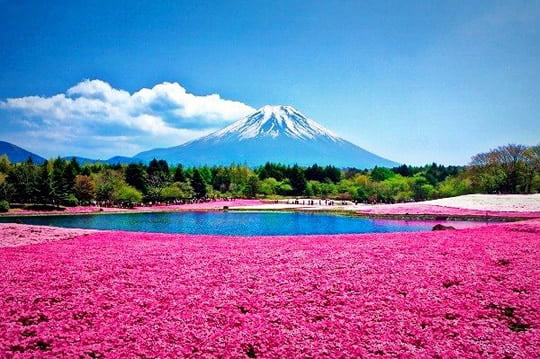 Shibazakura or pink moss is a beautiful flower that blooms in brilliant colors of magenta, pink, and white. Fuji Shibazakura Festival is located in an area that offers breathtaking views of vast fields of shibazakura flowers, with Mount Fuji in the backdrop. 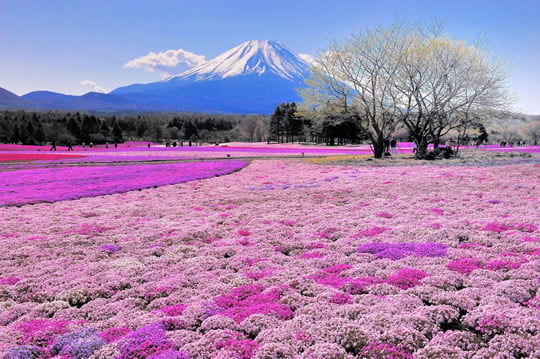 The best time to see these stunning fields of pink moss is from mid May through the beginning of June. 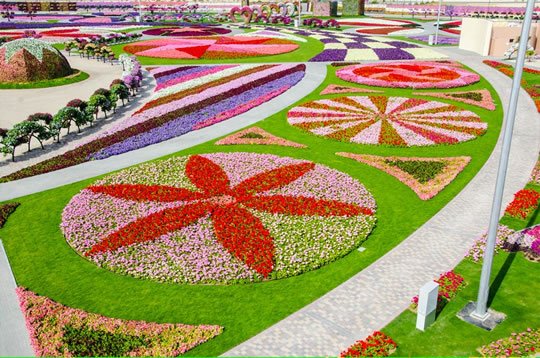 Developed in the middle of the desert, the incredible Dubai Miracle Garden is the world’s largest natural flower garden.

The 72,000-square-meter colorful garden is made of 45 million flowers fashioned into the shapes of hearts, stars, igloos, pyramids, flower-decked vintage cars, arc-shaped walkways and so on. 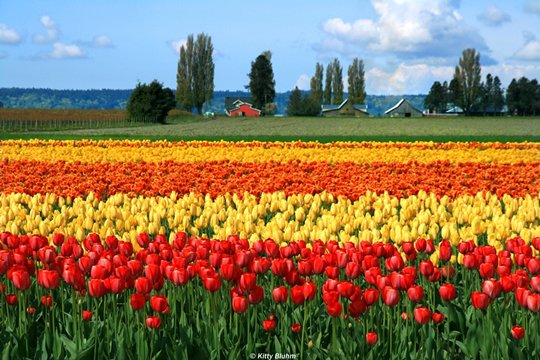 Across the 350 acres of fields, grow over 100 varieties of neatly planted colored tulips. 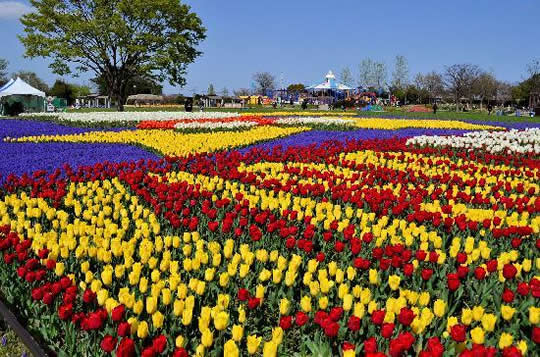 Kisosansen Park can be enjoyed all year round with its beautiful seasonal flowers. But it is in spring that the park comes alive with the famous Tulip Festival.

In April, the large flower garden is adorned by thousands of tulips arranged in a flowing river style. 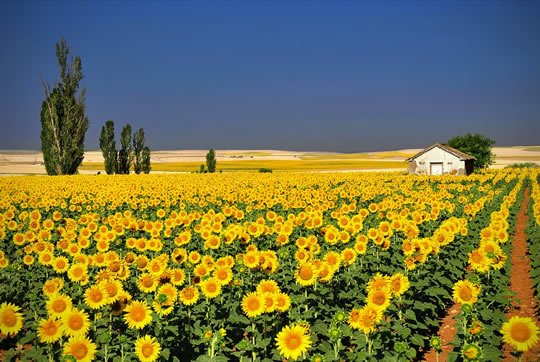 Set among medieval villages in the countryside, the sunflower fields in Spain stretches for miles and turn the landscape in yellow during the summer. 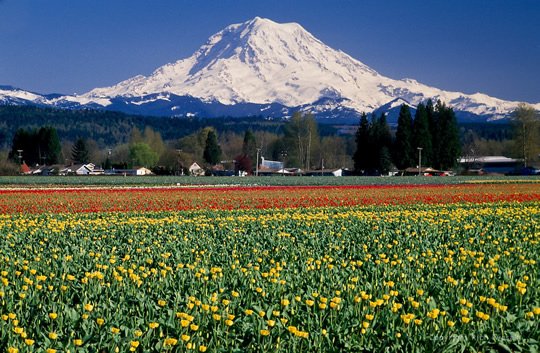 Every spring, Daffodil and Tulip fields transform the Puyallup Valley with a bloom of colors.

The flowers make the Mt. Rainier landscape, in the background, even more magnificent. 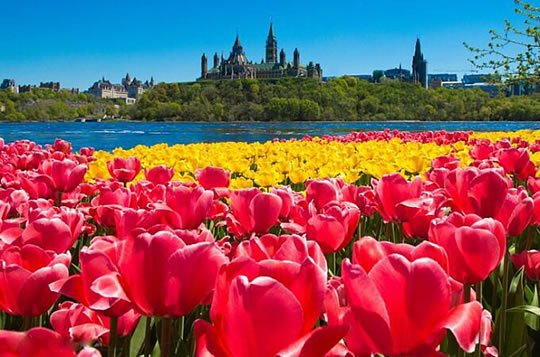 Held annually in May, the Canadian Tulip Festival showcases over 3 million tulips throughout Canada’s Capital Region. 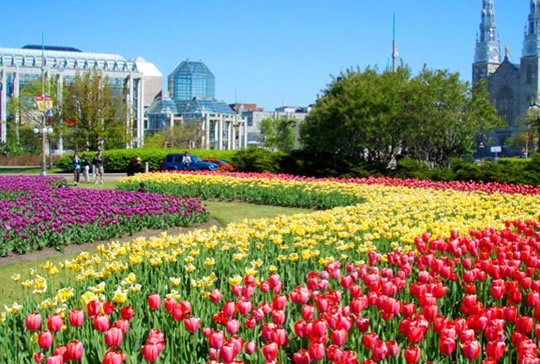 Large displays of tulips are planted throughout the city, and the largest one is found in Commissioners Park on the shores of Dow’s Lake. This amazing event of color and beauty is North America’s largest tulip festival. 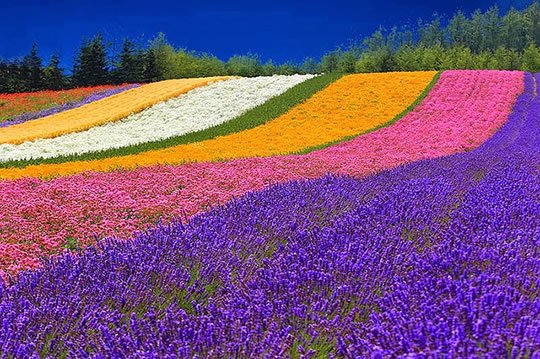 Nakafurano is a town famous for its numerous fields of lavender. 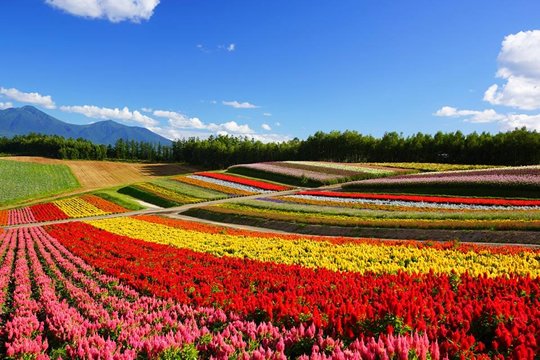 Located in Nakafurano, Farm Tomita is a popular tourist attraction in the summer that plants giant rainbow color flower fields of lavender, poppies, marigolds and many other varieties.