Bay of Islands is one of New Zealand’s great fishing, sailing and holiday destinations located in the beautiful east coast of the Northland region. It has one of the best maritime parks in New Zealand, featuring an amazing range of marine life, such as whales, penguins, dolphins and much more, in an area with 144 islands and bays. 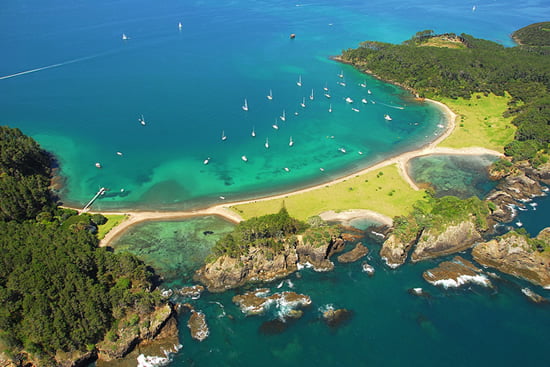 Aerial View of Bay of Islands

The bay itself is an irregular 16 km-wide inlet. It is a natural harbour, which has several arms that extend into the land. The area has several towns scattered around the coast, each one with unique culture and lifestyle, combining both great outdoor experience and significant historic sites. The main centers include Kerikeri, Paihia, Waitangi, Opua and Russell. Paihia is the main visitor center for Bay of Islands, with friendly locals and happy cafés, and is where many sightseeing cruises by both land and sea begin. 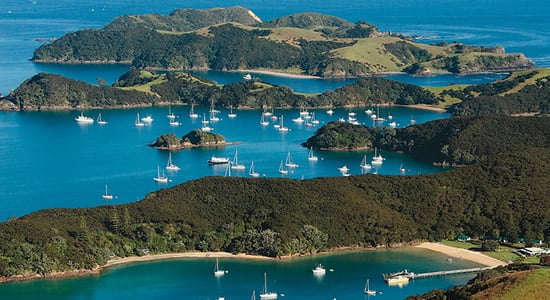 Kerikeri is a fertile orchard town on the northern extremity of the Bay. The district, the earliest permanent settlement in New Zealand, bears some of the country’s oldest buildings, bush walks, several arts and crafts galleries and local cuisine. If you arrive in Bay of Islands by sea, Opua is your port, with cosmopolitan marinas and anchorages with full chandlery, lively cafes and bars. It is where a number of charter companies offer yachts you can sail yourself. 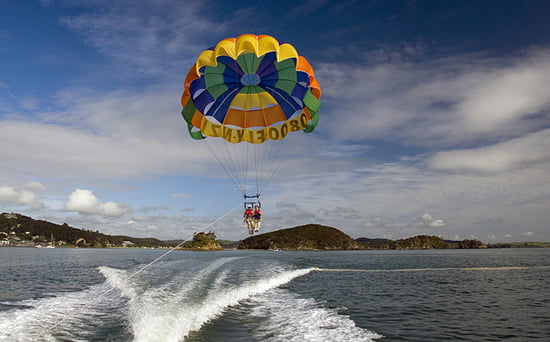 There are plenty of recreational activities to do in this area, whether you’re seeking for thrilling adventure or just to rest. Try skydiving, parasailing, quad biking, horse trekking, scuba diving, kayaking, paddling a waka or taking one of the many well-maintained walking tracks that provide breathtaking views throughout the bay. If you want to relax and marvel at the majestic scenery, spend your time on a secluded unspoilt beach with clear turquoise coloured waters on some of the 144 stunning islands, taking a walk or just lazing around listening to the songs of seabirds. 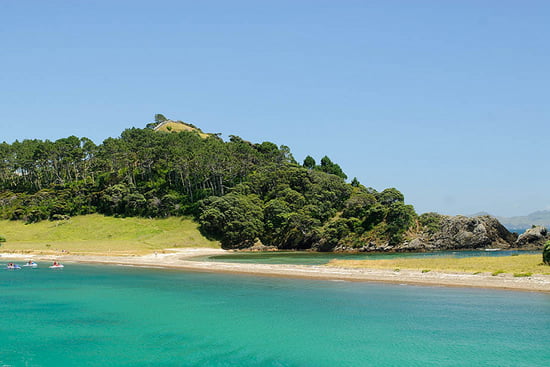 Charter a yacht or launch, cruise uninhabited islands with lagoons and natural rock caves, take a scenic flight, take a guided tour through historical sites, go fishing or swim right up close with the dolphins in their natural habitat. 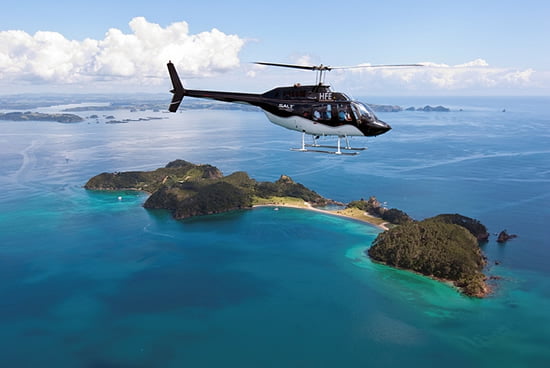 With the warmest water in New Zealand and the friendliest dolphin species (Bottlenose), Bay of Islands is the best place to experience swimming with dolphins. 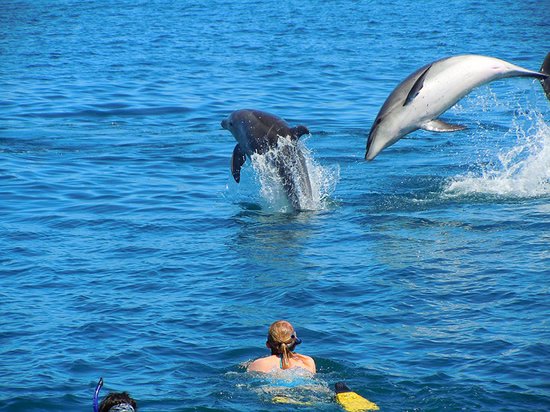 Dolphins in Bay of Islands | Photo by: engiles

One of the most popular attractions in Bay of Islands is the Hole in the Rock, in the beautiful Motukokako Island, off Cape Brett. You can take a boat trip through the hole in a huge rock and explore deep into the spectacular Grand Cathedral Cave. 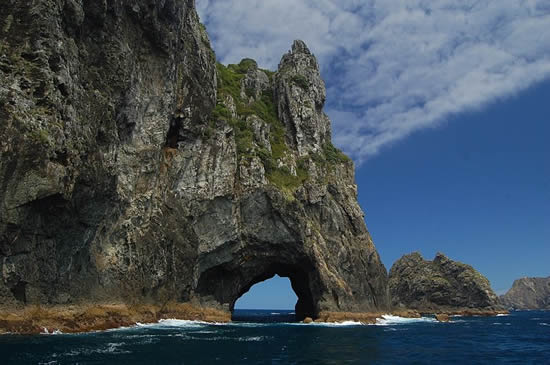 Hole in the Rock – Bay of Islands | Photo by: Matt Lemmon

Some tours travel at speeds of up to 100 kilometers, the most thrilling way to see this famous icon. Here you can also swim with the local common and bottlenose dolphins. 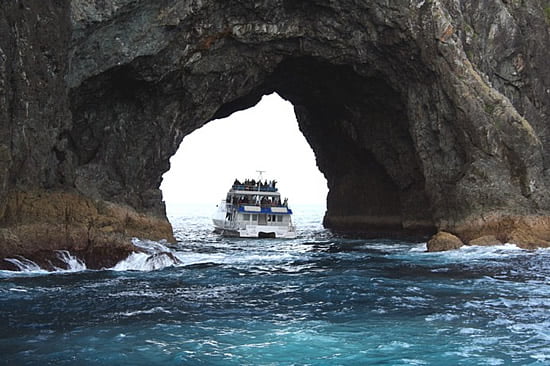 Hole in the Rock – Bay of Islands

The beautiful Cape Brett Lighthouse can be reached by walking a coastal track or seen by taking a boat to the hole in the rock. 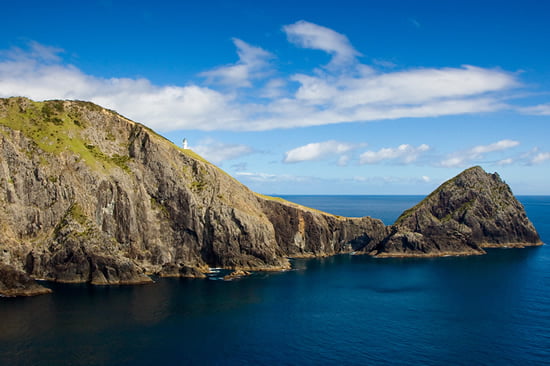 Urupukapuka is the largest of over 140 islands in the bay. It is a unique place to visit and relax the whole day enjoying time on the stunning beaches. There are many clear water sand beaches and diving is particularly good on the east coast where there is plentiful reef life. This island is also full of historic and archaeological sites, ideal to explore both Maori and European local history. 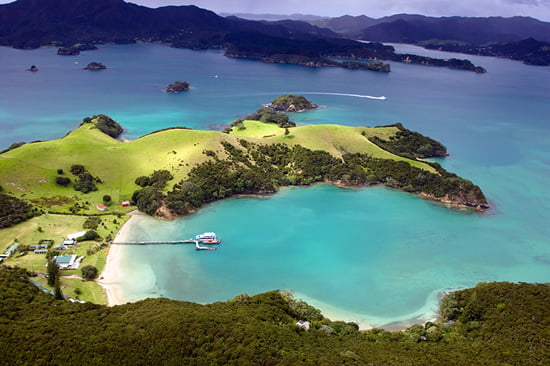 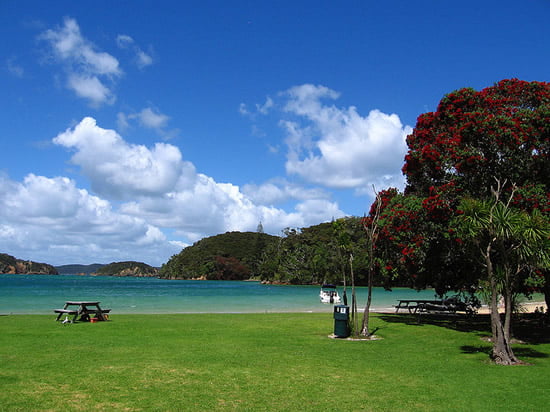 Another attraction in Bay of Islands is the Motuarohia (Roberton) Island. The most photographed scene in the Bay is distinguished by its two glorious lagoons. There is a track that leads to the top of the island, where you can get spectacular aerial views of the narrow strip of land and sand with the twin lagoons. 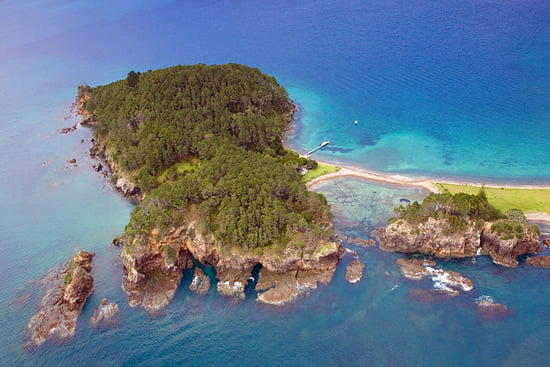 The Kerikeri Mission House, the country’s oldest house built in 1821, and the wonderful Mission’s Stone Store dating from 1832, New Zealand’s oldest stone building, are regarded as the “Cradle of the Nation”, and are a must for all visiting this region. 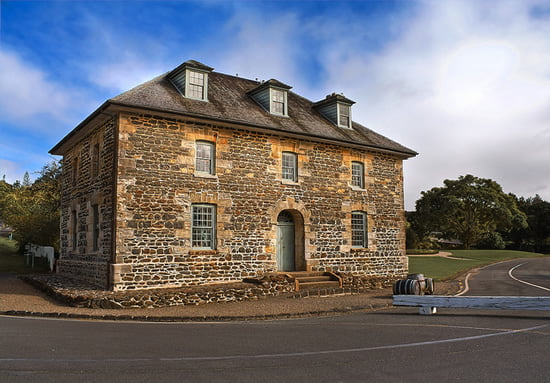 Just a few kilometers from Kerikeri center and Kerikeri Mission House, it’s the Rainbow Falls, a beautiful 27m waterfall where the water tumbles into a pool surrounded by native bush. 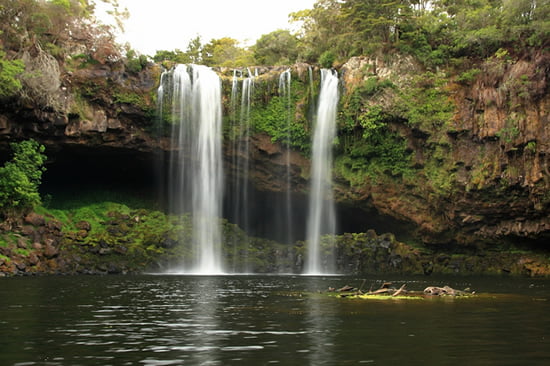 Bay of Islands is a great base for exploring all of the Far North. You can travel north to Cape Reinga – the lighthouse where the Pacific Ocean meets the Tasman Sea, Tepaki Sand Dunes and Ninety-Miles beach, which is actually 55 miles (88 km) long. 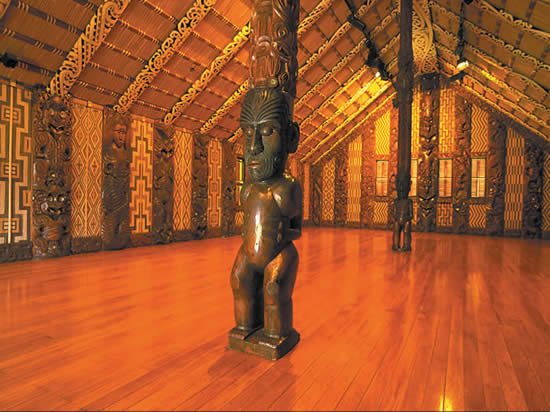 The rich history of Bay of Islands makes it the perfect place to find out why this region is considered to be the birthplace of New Zealand as a bi-cultural nation. It was where the famous Treaty of Waitangi became the founding document for the new nation. In Waitangi, visit the Maori Whare Runanga (Meeting House), which is a fully carved construction with carvings representing the major Maori tribes, and the largest Maori War Canoe in the world, the Ngatokimatawhaorua. 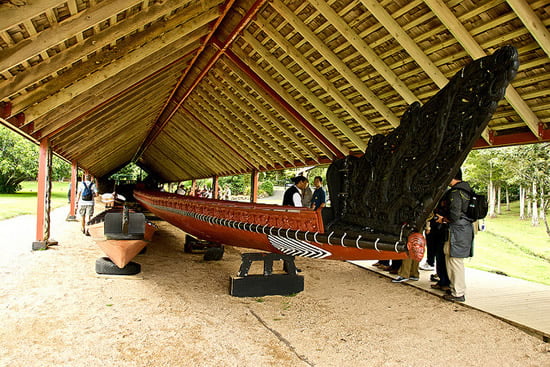 Paihia, the hub of Bay of Islands, is 230 km north of Auckland.