Abel Tasman is a National Park located at the north end of the South Island, New Zealand. It is named after Abel Tasman, who in 1642 became the first European explorer to sight New Zealand. 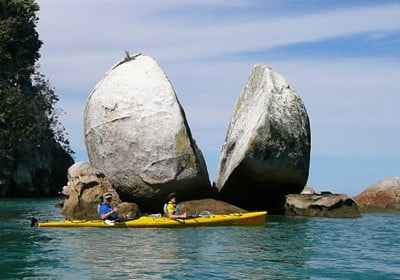 Although being the smallest, Abel Tasman is one of New Zealand’s most beautiful and popular areas, covering 225 square kilometres of lush native forest interlaced with walking tracks and bordered by golden beaches and sandy estuaries fringed by clear turquoise waters, and crystal clear streams that tumble down mossy valleys to join the ocean. 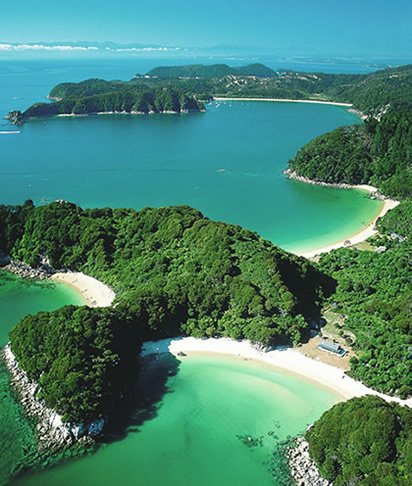 The park is in one of the sunniest places in the country, so it is a good place to visit at any time of the year. Its most notable features are the golden sandy beaches, the rich estuaries, the fascinating sculptured rocky coast (mainly granite but with a scattering of limestone and marble), and the world-famous Abel Tasman Coast Track. 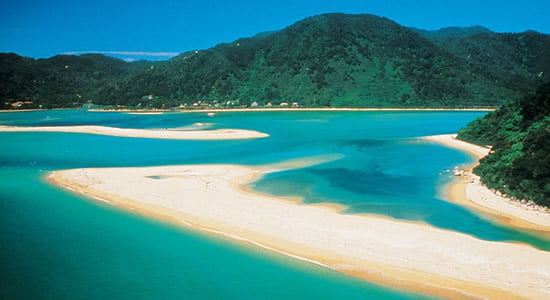 The small settlements of Marahau and Wainui Bay are the entrance and exit points to the park, and can be reached by road from either the town of Motueka or Takaka. From those points, there are no roads to vehicles, and access is either on foot or by boat, which makes the northern reaches of the park more remote and peacefully beautiful. 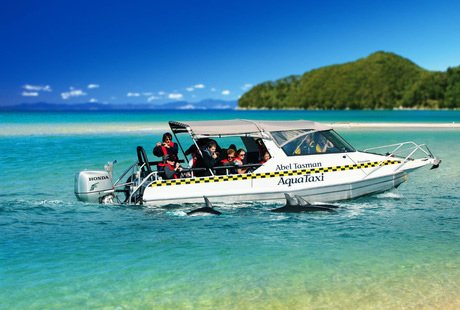 The scenery is enhanced with the marine wildlife. You can have a face-to-face encounter with fur seals swimming in the blue waters or resting on the rocks along the coast of the park, countless seabirds, penguins, and maybe dolphins and Orcas during the months of November and December. Fur seals can easily be found particularly on the more remote granite headlands of Separation Point, Tonga Island and Pinnacle Island. 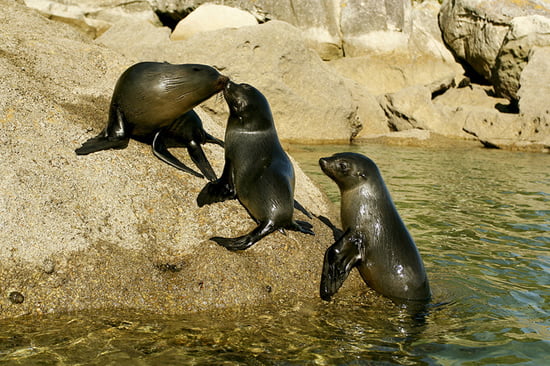 The three largest islands in the park, Tonga, Adele and Fisherman, are home to many native plants and animal species, which are no longer found on the nearby mainland. There is a large seal breeding colony at Tonga Island, which is not suitable for public access, and boats or kayaks can not approach closer than 20 metres.

Interesting rock formations are abundant in Abel Tasman National Park, but none is weirder than the Split Apple Rock, a unique giant boulder split in two pieces so cleanly as if something or someone had hit it with an ax. Maori legend says that it was the result of a fight between two brothers.It is indeed intriguing , so it is one of the top wonders of the park. 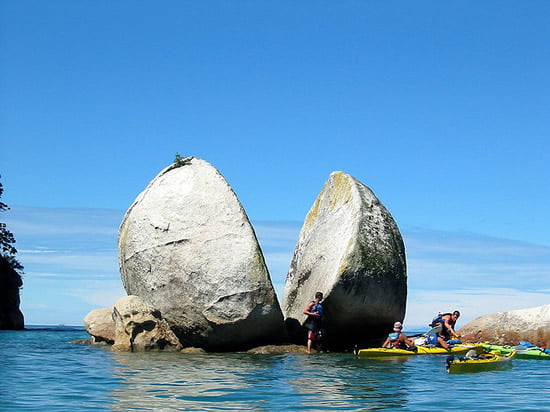 It surfaces out of the turquoise Tasman Bay on Towers Bay, between Marahau and Kaiteriteri at the beginning of Abel Tasman National Park. Many visitors take a kayak to explore Split Apple Rock at close range but the rock is clearly visible from the beautiful sandy beach. At the beach is possible to explore a big sea cave as well.

Besides the beauty of the beach itself, with golden sands and turquoise seas, Anapai Bay (“good cave” bay) also features some unusual rock formations along the shoreline, including a rock stack that resembles a Moa from Easter Island looking at the sea. Don’t be tricked by the photos, these rocks are really huge, and actually a person could stand up under the stone arch you can see in the photo below.

Tonga Arches or Arch Point is a set of unique granite rock formations sculptured by the sea into several openings and arches through the cliff. In high tides, it is possible to pass through and explore the arches by kayak, and you can walk through them in low tides. 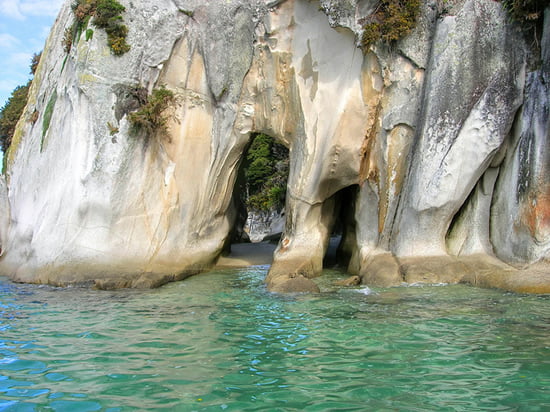 Watering Cove is home to an intriguing coastal landform called Kiwi Rock. The soft material of Kiwi Rock has been sculpted by the wind and water into the shape of a kiwi bird. Kiwi is a cute flightless bird that is the national symbol of New Zealand. It has hair rather than feathers and a long snout like appendage. 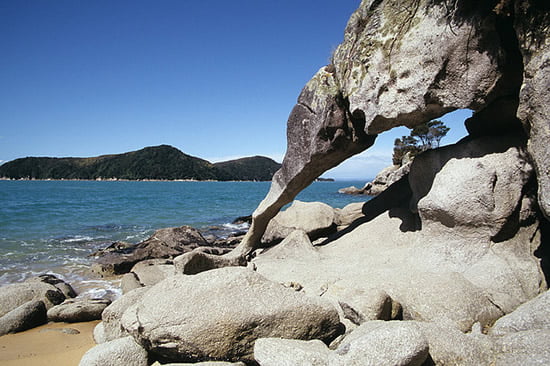 Another point of interesting you may find exploring Watering Cove is one of the many sea caves Abel Tasman features. This one is big enough to take beautiful photographs from inside it. 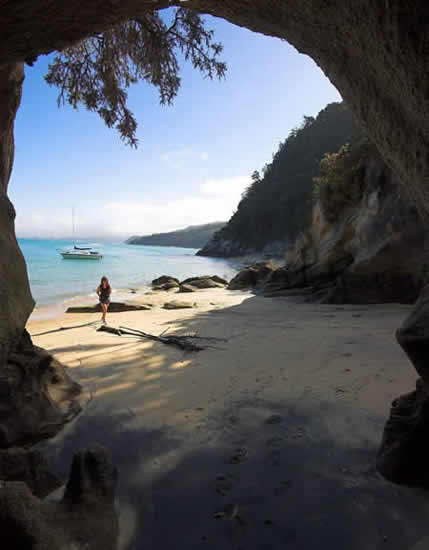 At Anchorage Bay, there is an interesting rock archway with the shape of a lock, covered by several trees on its top. It is possible to see glow-worms in the cave at night. Many of the names carved into the rocks are from sailors who were here more than a century ago. 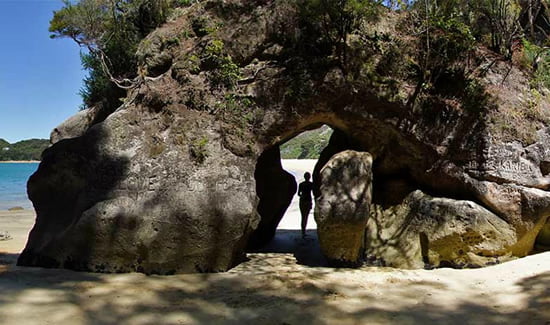 There are a number of excellent tidal lagoons along the Abel Tasman coastline, like Torrent Bay Lagoon, Falls River, Bark Bay and Awaroa Inlet), but the stunning Frenchman’s Bay captures the sight with a calm tidal lagoon of clear blue water especially beautiful viewed from above on a viewpoint along the Abel Tasman Coastal Track. There is also a track to the bay at the top of the ridge after you’ve climbed up from the swing bridge on the Coastal Track. The Frenchman’s Bay Lagoon can only be explored by boat or kayak 2 hours either side of high tide, because there is insufficient water in the lagoon outside these times. 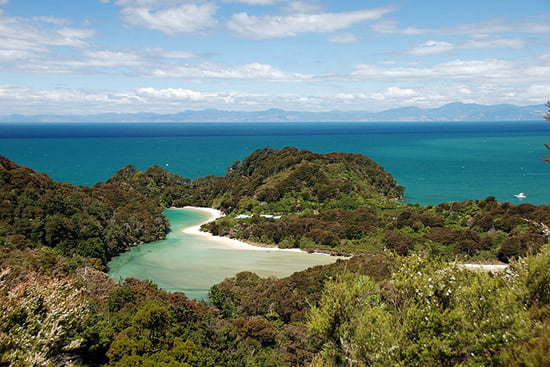 Tinline Bay is home to a bizarre tree that found an unusual place to stand and grow. The sight is really surreal and offers a great opportunity for beautiful photographs. 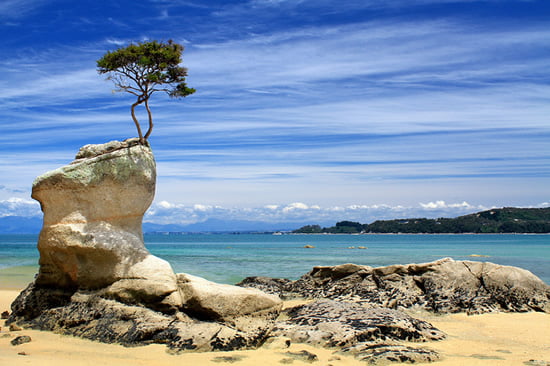 Tonga Island Marine Reserve covers an area of 1835 hectares, extending one nautical mile (1852m) offshore from the mean high water mark of Tonga Island, and the coast between Awaroa Head and the headland separating Bark Bay and Mosquito Bay. The marine reserve protects all marine life within its boundaries, including fish, shellfish, seals, penguins and other seabirds. Kayaking to Tonga Island to see the seal colony is a notable highlight. (Please remember that seals must not be approached closer than 20 metres and you cannot land on the island). 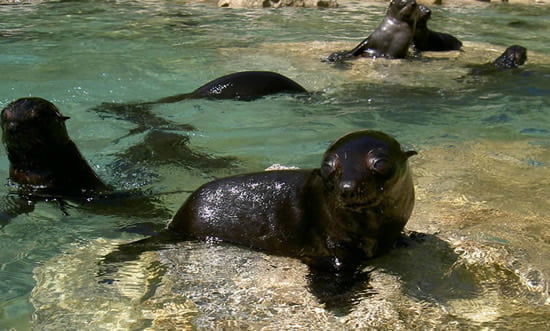 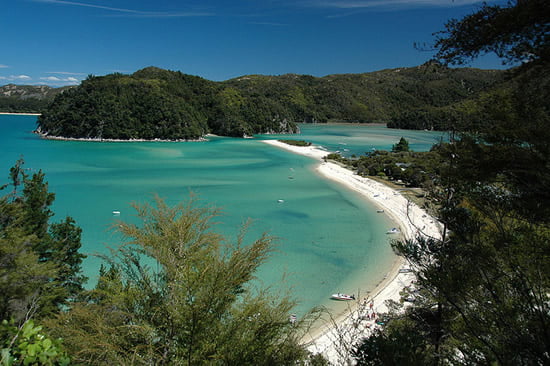 Abel Tasman Activities and Things to Do

Abel Tasman is a perfect destination whether you’re looking for an active holiday or a lazy day at the beach. You can walk for 3-5 days and take a break on amazing beaches or, if you have just a day trip, enjoy one of the many shorter, day walk options using a cruise boat, a water taxi or sea kayak to enter into the park, and just stop by on one of the many unspoilt beaches you will discover along the way. 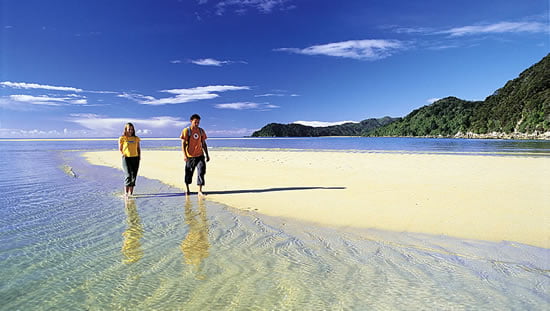 It is a popular tramping track, classed as one of New Zealand’s Great Walks, which follows the coastline for 54.4 km with no point higher than 150 metres (approx. 500 feet). It climbs around headlands and through lush native forest and opens out to a series of beautiful beaches and wide, sandy estuaries, where you can break the walk with a well-deserved swim. 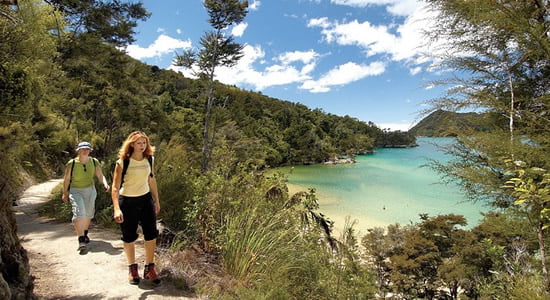 You can also catch water taxis to beaches along the track or kayak along the coast. The track takes between three to five days to complete and can be walked from either road end car parks at any time of the year. All streams are bridged but there are two crossing areas that are tidal dependent and must only be made within a few hours either side of low tide, so be sure to consider the tide schedule before starting.

Kayaking is a lovely way to explore and experience the beauty of Abel Tasman’s coastline. During a kayak trip you can take a break at the golden beaches, bend the estuaries and move further up crystal blue streams, discover some amazing sculpture rock formations, go adventure through some sea caves, and maybe get really close to the marine wildlife, like seals, dolphins and more.

There are areas of the coast that can only be accessed by sea kayaks. During high tide, some sea caves may get flooded, forming water galleries, which can only be explored by kayakers. 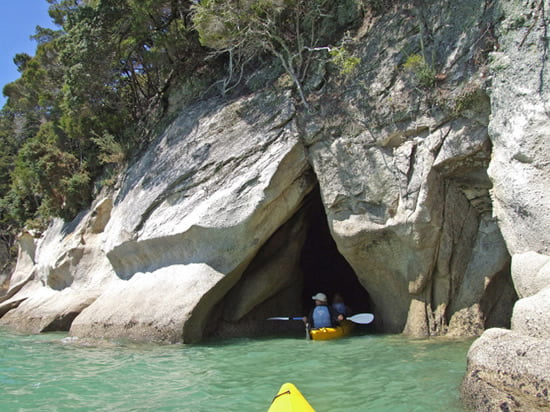 You can be independent and rent your kayak or join some of the kayaking companies that run guided tours from Marahau, Kaiteriteri and Golden Bay. Either way, there are single and multi day kayaking trips options, and you can stay at campsites, huts or lodges within the park – just as you would if you were hiking. Some agencies also give you the option of a multi-day kayaking and walking trip. 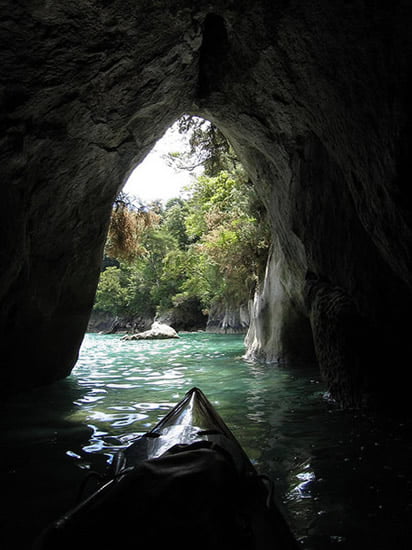 Kayaking in a Cave at Stillwell Point – Abel Tasman | Photo by: teamtrev – Flickr 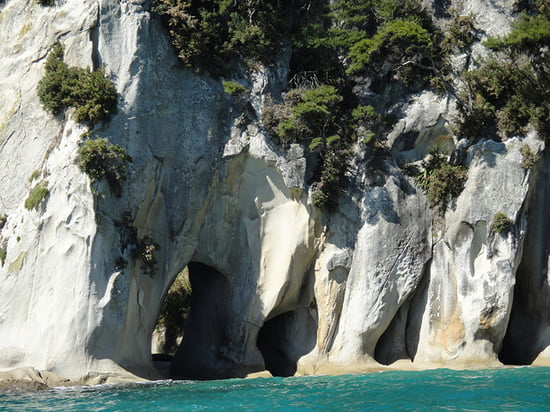 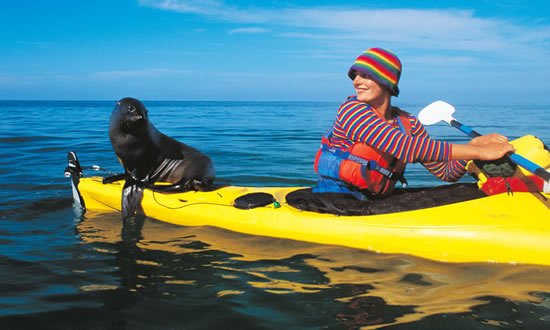 If you’re on a tight schedule or you think kayaking is a big challenge, Abel Tasman National Park offers a variety of boat scenic cruises. There are part day to full day with walking, kayaking and sailing options. Most companies depart from the Marahau or Kaiteriteri going to the main beaches and attractions of the park. There is also the option of water taxis that can drop you off on a golden beach or collect you at the end of your hike or sea kayak adventure. 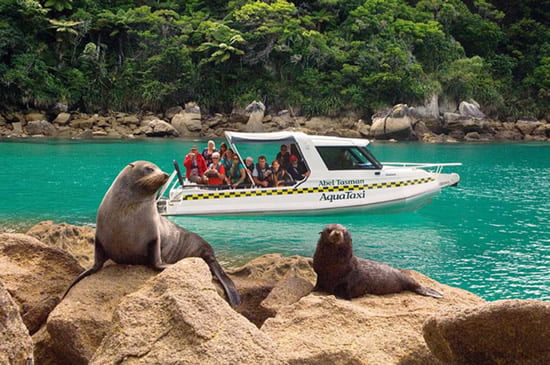